George Pool Chappell was born in 1857 in the then Bedford section of Brooklyn NY.  When I first moved to Bedford Stuyvesant it was George Chappell's 1888 First AMEZ Church ( Tompkins Avenue Congregational Church) on MacDonough Street and Tompkins Avenue  that caught my attention.  The campanile was Bedford Stuyvesant's own venetian tower I thought to myself. Tompkins Avenue Congregational Church AKA Dr. Meredith House was one of the largest protestant sanctuaries in the country.  I often wonder how such a young architect at the time got such a large commission. I think it has a bit has to do with Chappell living across the street from the church site at the time.

About two years ago I got my own commission to do renovation work on a beautiful landmarked George P. Chappell house on Dean Street.  While surveying that house I began to respect this very smart Victorian architect.  I wanted to know more about him his works, what kind of man was he... The good news is that we know much of his Brooklyn works (look here) the bad news is we know nothing about this mystery man except he was very respected and a stand-up citizen of Brooklyn .
According to Suzanne Spellen (aka Montrose Morris on brownstoner.com) Chappell appears in Brooklyn directories in 1878. We know nothing about his education or possible apprenticeships or training. We do know that he was extremely talented, and prolific. Most of his work was done in what is now Crown Heights North, Bedford Stuyvesant, and Park Slope, along with a lesser amount of work in Clinton Hill and other neighborhoods. He is listed in the census as living in Bedford Stuyvesant, on Monroe Street, when he was 23, with his mother and grandmother, and he is listed as a builder. Later in life, he moved to Crown Heights North, and lived on St. Marks Avenue, at least in the beginning of the 20th century. As more and more areas become landmarked, or at least researched, more Chappell buildings are being re-discovered and credited to him. Chappell should be name Mr Dean Street of Mr. Crown Heights.  Most of the ohh ahhh buildings in that neighborhood are done by Chappell.

I want to focus on the George P. Chappell buildings in the Proposed but not landmarked Bedford Historic District.  According to a tour I attended with Guru Andrew Dolkart, architect  George Chappell earliest buildings in this Bedford area are 76 and 78 Halsey built sometime before 1885. Chappell was one of the first architects to not use the typical Neo-Grec house designs in Bedford.  Chappell's 76 and 78 Halsey Street is done in the simple Romanesque Revival Style which added some spice to this area.

In 1886 Chappell out did himself in Bedford with the house he designed at 194 Hancock Street for Louis Gibbins.  194 Hancock Street uses Renaissance-inspired forms and details, which tend to exhibit a more elegant handling of materials and ornament.   The current owners have done a great deal of work restore this house back to its original glory.

1887 was a busy year for Chappell in Bedford District with the building of nine house being designed and built. 60 Macon Street Done in a classic Chappell style using a large bay front done in brick with a boat cut brownstone base. Oriels on the side to give this place great light and garden views.

Chappell will be very surprise today to learn that many of his houses are now on the market for a million dollars here in Bedford, Crown Heights North and Park Slope.  This group at 271 - 279 Jefferson was built for developer Susanna and Walter Russell who built much of the Proposed Bedford District. We see from Prudential Douglas Elliman photos that Chappell's signature fret, woodwork and stain glass are still intact in 271 Jefferson.

The last group of Chappell 1887 homes in Bedford are probably his most famous but not because of the architecture but due to Spike Lee movie Crooklyn filmed at 7 Arlington Place.  1 - 7 Arlington Place are some of my favorite but somewhat simple homes done by Chappell.  The end  two houses, which are united by continuous sills and moldings, also share rusticated stone first floors and denticulated moldings. The two middle houses share similar brownstone facades with stone trim, identical cornices, and continuous moldings, all four houses remain well preserved.

Finally the Macon.  This is Chappell's largest residential building in the Bedford District. Chappell really took advantage of the curved intersection of Macon and Arlington Place.  This grand apartment was built sometime in the 1890s most likely after the World Columbian Exposition in Chicago in the classical style of the White City.  This building was built to compete with other high end flats such as the Alhambra and the Renaissance all within the same area.  George P. Chappell has many other buildings in Bedford Stuyvesant but I wanted to focus on the proposed landmarked buildings.
Chappell worked over fifty years building much of Bedford, Stuyvesant Heights, Crown Heights North, Clinton Hill and Park Slope. George Pool Chappell died in June 1933.

Posted by SAVE BEDFORD STUYVESANT at 4:28 PM 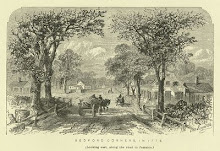